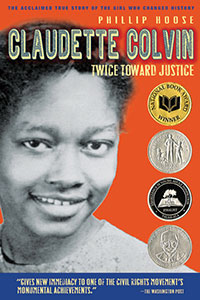 Claudette Colvin demonstrates how a teenager had the will and strength to stand up for justice. Most people know about Rosa Parks’s refusal to give her bus seat to a white passenger in Montgomery, Alabama in 1955. Most people don’t know that Claudette Colvin, a fifteen-year-old, did the same thing nine months earlier. She, too, was fed up with Alabama’s Jim Crow laws. Claudette had a different experience than Rosa Parks and faced far less support for her actions partly because she was a teenager. Her friends shunned her, and community leaders did not take her seriously because they saw her as a troublemaker. A year later, Claudette was a plaintiff in the case that struck down the Jim Crow laws. This strong-willed youth stood up for her beliefs and set in motion changes that affected the whole country.